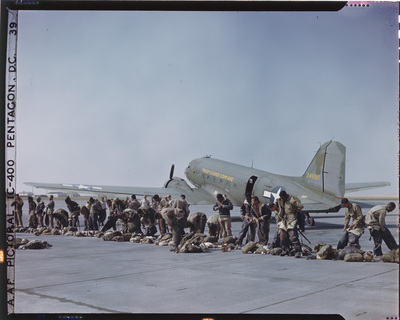 Photograph from a series held by the National Archives on the first African American Airborne unit, the 555th Parachute Infantry Battalion, also known as the Triple Nickle. This image was scanned at the National Archives reading room in College Park, Maryland. The description on the sleeve reads: "'Operation Fire Fly'. Fire fighting parachutists of the 555th Parachute Infantry don their heavy leather coveralls before boarding a C-47 of the First Troop Carrier Command. Soon they will be winging their way to another jump and another fire. Their equipment including two chutes and weighing between 75 and 125 lbs. lies before them. Pendleton Army Air Base, Pendleton, Oregon."