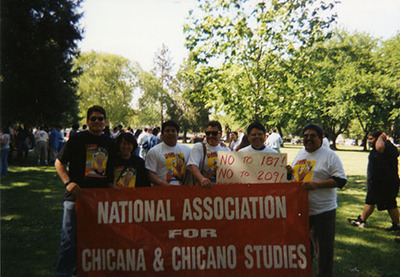 Group of men holding up red banner reading National Association for Chicana & Chicano Studies (NACCS) and a sign saying "No to 187! No to 209! Defend affirmative action". The men are all wearing white shirts with the 1997 NACCS conference logo. The 1997 conference was held in Sacramento, California. The program indicates a "Political Activity" on April 17. California Proposition 187 was called the Save Our State initiative and sought to curb undocumented immigration from Latin America. California Proposition 209 sought to prohibit the state from considering certain protected categories in terms of employment. Dr. Carlos Maldonado is on the far right and Dr. Gilbert Garcia is standing next to him. Both are professors in the Chicano Studies Department at Eastern Washington University.