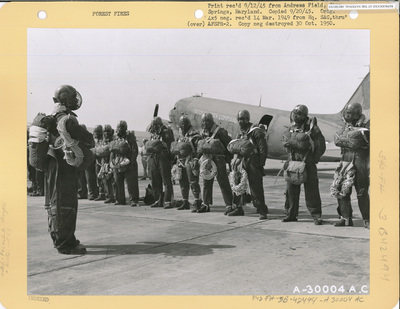 Photograph from a series held by the National Archives on the first African American Airborne unit, the 555th Parachute Infantry Battalion, also known as the Triple Nickle. This photograph was scanned at the National Archives reading room at College Park, Maryland. The description at the National Archives reads: "Fully equipped for a fire jump, paratroopers at the Pendleton, Oregon AAF, are briefed by their jumpstart before taking off in a Troop Carrier Command plane. Men of this unit may be dropped on fires anywhere in Washington, Oregon, Idaho, and part of Montana. Their gear includes heavy clothing, plastic helmet, wire face guard, two parachutes, first aid kit, 150 feet of rope, personal kit, and paratrooper's boots. The rope is for climbing down in case they land in a tree. Shovels and other gear are dropped later."