Smokejumper parachute caught in a tree 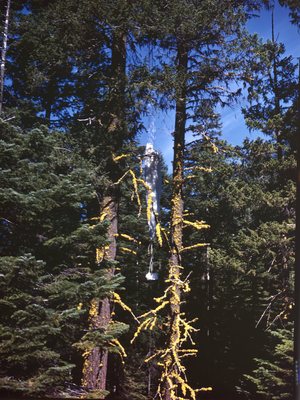 Photograph from a series held by the National Archives on the first African American Airborne unit, the 555th Parachute Infantry Battalion, also known as the Triple Nickle. This image was scanned by the National Archives at College Park, Maryland. Their description reads: "'Operation Fire Fly'. High above the ground in a stately pine and fir trees, a parachute is left dangling. The chutist, an experienced man at the game, has climbed out of his harness and down the tree by means of the 150 foot rope which all troopers carry. Later he will return for the parachute after the forest fire has been distinguished."