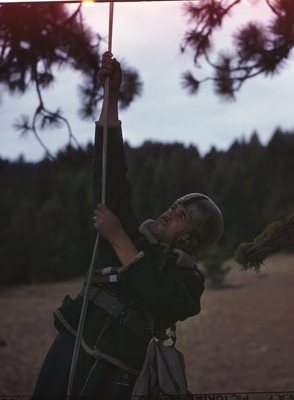 Photograph from a series held by the National Archives on the first African American Airborne unit, the 555th Parachute Infantry Battalion, also known as the Triple Nickle. This image was scanned by the National Archives at College Park, Maryland. Their description reads: "'Operation Fire Fly'. A paratrooper of the 555th Parachute Infantry Battalion works his way to the earth with the aid of a 150 foot rope which is a part of his equipment . These fire fighters prefer landing in tree tops rather than hitting the rocks and ledges that abound? in this region. Umatilla National Forest, Oregon." The member of the Triple Nickle is wearing a helmet and gear while pulling on a rope in a tree.

No known restrictions on image.